We love Nepal. Why?

Nepal, as we know is one of the most enticing countries for the tourists around the world. A country that is geographically small but has more to offer than its counterparts. Breathtaking views, pristine environment, ancient architecture, rich hindu culture, snow laden mountains and to top it all the overwhelming hospitality. Situated in Himalayas it boasts eight of the ten highest peaks in the world creating the best trekking opportunities in Asia.
The most common reason for tourists to come to Nepal is to complete the legendary everest base camp trek. However, as important as it maybe, it is not the only thing that Nepal has to offer. There’s so much more for explorers to tap into. Here is a list of 5 less explored places in Nepal that the urban travelers generally miss out on. Don’t make that mistake and the privilege of visiting this colourful country. 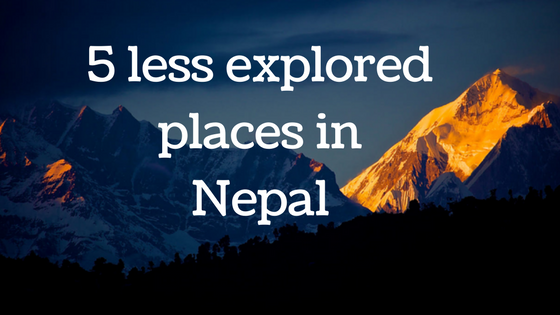 Jomsom-Muktinath is actually a trek which contains some spectacular views of the incredible mountain vistas, unique temples and monasteries along the windy valleys. Everest base camp trek is so magnanimous that it’s feelings overrides every other trek in the world. Still, if you are a hardcore hiker who wants to explore the length and breadth of Nepal then this trek is special.
The pine tree forests along the trail gives a different appearance to the villages. It gives you a wondrous insight into an idyllic life of rural Nepali people.
While walking on the route, you also get to see the diversity among the people and their distinct customs.
As Muktinath is a famous pilgrimage site for both Hindus and Buddhists, it is believed that bathing in the waters of Kali Gandak river guarantees redemption after death. Muktinath literally means the god of liberation. Devotees who are seeking moksha come here to seek blessings of lord Shiva.
In Muktinath you can witness one of the Nepal’s unique festivals i.e. Yartung- The annual horse race which takes place in early September.
The design of the houses is unique as they are built in order to resist the strong winds that blow up the valley.
Kagbeni, a more isolated place is just a two hour walk up the valley and the furthest place trekkers are allowed to go.

Bhaktapur known as the city of devotees is one of the three royal cities in the Kathmandu Valley.
It is also called as the cultural gem of Nepal as it is renowned for its elegant art, fabulous culture, colourful festivals, traditional dances and indigenous lifestyle of Newari community.
Though the 1934 and 2015 earthquake turned the city into rubble, it has been marvellously restored. Indian authorities went to pillar and post to help Nepal stand up on their feet, strengthening the age old ties of peace and brotherhood.
Strolling through the majestic alleys of Bhaktapur gives you a feel of the pre-historic times in this well-preserved city. It is like Kashi city of Nepal.
Make sure you attend at least one of them.

Pokhara is a really beautiful town in Nepal. The streets of this delightful city are lined with little wooden temples bustling with worshippers, handicraftsmen selling gorgeous dragon masks, and other artifacts made of brass. It is like stepping into a mystical land of ancient hindu wisdom.
It is home for numerous Buddhist monasteries and Hindu temples, the major tourist attractions are Durbar Square, Taumadhi Square and Dattatreya Square.
Festivals celebrated in Nepal are a way to pay tribute to the gods, remembering legendary events, and mark the seasons i.e. Dashain, Gai-Jatra, Bisket-Jatra, Tihar.
It has become a major tourist attraction in the recent decades because of its abundant beautiful spots and leisure life. It is an idyllic place to charge your batteries after a two-week trek. A good rejuvenation spot for travelers to absorb the energy from the consecrated town.
Pokhara is a town stretched along the shore of a tranquil lake offering a whole array of adventure  activities, a scintillating scenery and food choices galore.
You will find the best in trekking, boating, hiking, and arguably the best paragliding venue in the world with the stunning Annapurna range in the backdrop.
Not to forget this little town is the gateway to the famous Annapurna circuit trek which is a classic as the length of the trek has many deviations off the main trail leading you into small villages which to this day are virtually untouched by modern development.
A short bike ride to Sarangkot in the evening where you can witness the magnificent sunset cannot be missed.
A panoramical view of the Himalayas surround you when you take a walk along the shores of Phewa Lake, whereas Begnas and Rupa being remote lakes away from the hustle and limited access they are more serene, quiet and peaceful.

Submerging oneself to the culture and tradition of Nepal would be incomplete without visiting the peaceful town of Lumbini.
Lumbini being the birthplace of Lord Buddha, is one of the world’s most holiest sites with a peaceful atmosphere being the evidence to the amount of reverence shown by the people.
Mayadevi temple in the Lumbini garden is said to be built 2200 years ago being the proclamation as the birthplace of Lord Buddha which makes it the most important place of worship for the Buddhists.
As we know, in the 21st century we are all busy with our day to day life and want to relax at least on the weekends, Panditarama Vipassana Centre is a great option where you can immerse yourself in some yoga and meditation, and talk to  the thriving community of Buddhist monks who live in the vicinity.
It takes around a day or two to explore the temples and absorb the serenity of the scenery.
Though Lumbini is in Nepal, it is just 10kms from India indulging in the sub mixture of Indian/Nepali homemade local food is a refreshing idea.

Langtang is situated at the north of Kathmandu valley, bordering Tibet, best known for its pristine forests, high elevation meadows of wild sheep, and jaw-dropping mountain views. Here the trails are less crowded and the treks more rewarding.
It is rich in its diversity of flora containing huge deciduous oak trees, maple trees, evergreen pines and rhododendron which thickly forest the deep gorges of Bhote Koshi and Langtang Khola. The fauna is equally diverse with animals like Red Pandas, Himalayan black bear and Rhesus monkey which are the inhabitants of the forest around Ghoda Tabela and Gosainkund.
There are rumours that the Langtang valley is now closed for trekking after the enormous landslides swept away the village completely, but that is not the case, the valley is still open for trekking.
It can be reached in a few days from Dhunche or trekkers can hike from Sundarijal in the Kathmandu Valley via the picturesque villages of Helambu. While walking through the unspoiled national park you can enjoy the splendiferous Himalayan nature and an insight into the lifestyle and culture of the Tamangs who are the inhabitants of the region.